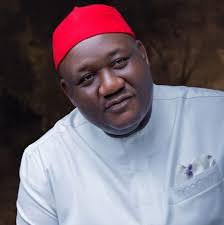 Imo North Senatorial representative Senator Ben Uwajumogu has died.
Mr. Uwajumogu died in the early hours of today been Wednesday 18th December 2019 in Abuja after falling ill for several weeks, according to his colleague Elisha Abbo. He was 51.

Elisha Abbo senator from Adamawa State said “I can confirm that my colleague and brother Ben Uwajumogu has left us to be with the Lord, It calls for sober reflection. It is clear that this world is like market and when you come you will go back home, Ben has come to the market he has behaved well and gone back to account for his good deeds on earth”. “Our thoughts and prayers are with his family” he added.

Senator Uwajumogu was a member of the ruling All Progressives Congress. He was initially treated in the United Arab Emirates for his protracted illness but recently returned to Abuja after showing signs of recovery, according to a source familiar with his situation.

The Senate has yet to formally announce the development, but a senior aide to Senate President Ahmed Lawan disclosed that his principal had been informed of the development and a formal statement would be issued soon.