Why do women wear Waist bead known as jigida or ileke idi in Nigeria? 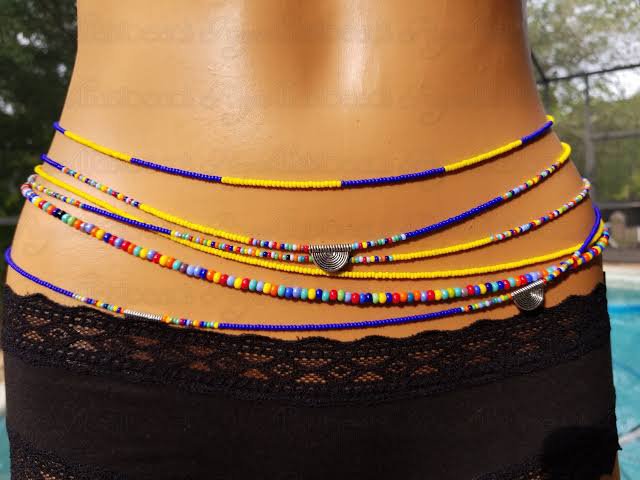 It is an ornament embraced by different African cultures. In traditional African societies, there are different myths and beliefs surrounding the significance and use of waist beads. There are four major reasons the use of waist beads is popular across women in cultures:
Sexual maturity;
Sign of chastity;
Sexual appeal and
Body shaping.

Perhaps you are among the minority who haven’t had such an opportunity to see a woman with waist beads but at least you have heard and seen Tiwa Savage’s “African Waist” as she draws attention to her African waist’s beauty further enhanced by the help of beads. If that is a little walk down memory lane for you, then there is Mr. Eazi’s recent song, “Surrender”. Fans have to admit that they were held spellbound and surrendered to the lady in a small green wrapper whose red waist beads moved when she swerved her hips that caught and held the attention of many. Below is the importance of waist beads in lovemaking.

The history of waist beads varies but many scholars agree that the use of waist beads began in Egypt (North Africa) and was simply called girdles at the time.

Documented records reveal that waist beads dates to centuries but became popular in the 15th century after Egyptian women used it as a public sexual appeal especially when they wear the scented or traditionally potent ones. This is further re-emphasized by Ohangla musician, Otieno Aloka who sings that Kanungo e Teko (the waist is where the strength lies).

Ghanaians believe that wearing these waist beads fat will not go to the belly; instead fat will go to the hips, butt, and legs.

Many societies also believe that women’s waist beads are said to possess the power to attract and evoke deep sexual feelings for men. Young ladies especially the married ones are advised to continue wearing waist beads as it “charms” men to remain faithful. Some cultures believe that if a woman stops wearing her beads, the husband might be tempted to cheat with another woman who puts them on.

A bead seller simply identified as Auntie Monica also expressed her staunch belief that waist beads serve as a magical protection against a rapist. According to her, any woman wearing waist beads who is confronted by a rapist should just look for a hard ground surface and tear the beads. The clattering of the beads on the hard ground will magically make the man lose erection immediately. Despite people’s attempt to demystify the waist bead, it has today become seen as that which has potent powers to make a man, including the impotent, aroused.

The Yoruba tribe of Nigeria also has a popular belief in the power of the waist bead to serve as birth control. The beads are purportedly laced with charms and worn by women to prevent unwanted pregnancy.

Certain cultures, especially in Ghana, also hold the belief that waist beads are the best cure for convulsions in children.” It is believed that when a child suffered convulsions in the past, all that was needed was to place the child on the bare floor in a corner of a room. Any woman with beads on her waist would gently remove them and place them on the sick child. Within five minutes, the child would be cured.

Traditionally, charmed waist beads are worn by women to ward off negative energy from the body and to close in positive or protective energy around the body. They are especially worn by pregnant women to protect their unborn babies too.

In addition, there are also cultures that believe waist beads tell whether a woman is a virgin or not. When a girl starts menstruating, her parents give her waist beads to show that she is now ripe for marriage. The way the waist bead moves when she walks determines if she is reserved or not.

Significance Of The Colours Of Waist Beads
Apart from the importance of waist beads, traditional African societies have had the spiritual beliefs associated with the colors of the beads embedded in the string. According to folklore, different hues of waist beads impart different properties. The major ones are:

Waist Beads And Sexuality
You cannot have a wholesome conversation about waist beads without talking about it being a visual aphrodisiac. The use of waist beads is heavily linked to sex as they seem to rouse desires that stem from a time when beads were worn often and in the open.

Waist beads have for a long time been associated with female sex and sexuality. In some traditional societies, there are several beliefs a woman’s waist bead must not be worn outside the bedroom and is reserved for only one man.

For women that make use of waist beads, a man is obliged to play with the beads because its sound is like music to the ears and gets her aroused. There are men who have confessed that having sexual relations with a girl wearing waist beads is not only attractive and stimulating, they also get excited by the movement of the beads during lovemaking.

“The sound of the beads during sex urges my guy on,” explained Patricia Naa, She said she didn’t like waist beads but had to wear them to satisfy her boyfriend, who loves to see the beads on her. Nonetheless, women’s waist beads are said to possess the power to attract and evoke deep sexual feelings for men.

The waist beads can also be used to improve and prolong foreplay during lovemaking. According to some men, you will have something to run your fingers along. Since they are worn against the SKIN, it is considered another way of playing with your partner.

It is further believed that the movement of waist beads against the skin between partners during lovemaking increases sensation and excitement, making sex more enjoyable.

Furthermore, a woman’s buttocks mean a lot of things in African society and have much sentiment attached to it as it is believed to house the essence of a woman’s feminism and sexuality.

Other Important Use Of Waist Beads
In terms of other importance of waist beads, asides sexuality and intimacy, waist beads hold some enticing qualities that have dragged them right from the 15th century to this date.

Maturity And Growth
In Africa, waist beads were usually used to signify the changes a female body goes through over the years. Young female, as soon as they hit puberty, were made to wear these waist beads to ensure people, specifically men that they have reached just the right age of marriage or mating. They also symbolized female features that made them a whole lot different from men and their masculine features.

Body Shaping
In western Africa, ladies would try to fathom their body shape according to it. It also used to give them an insight upon weight loss or weight gain. People also use it as an indicator of pregnancy since it shows the baby bump. When the waist beads start getting tight, that means you are gaining weight and when the waist beads start getting loose, it’s a green signal about losing weight.

Symbol of Chastity
In western Africa, a virgin will wear waist beads, and during the wedding night, the only person allowed to remove them is her husband, which makes the wedding even more symbolic.

Do you know of any other importance of waist beads or it’s significance as it relates to your culture, traditions? Kindly reply in the comment section. 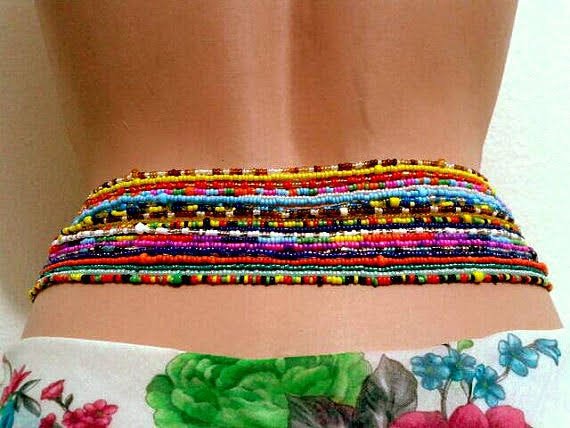 Tags: And bead its significance Waist