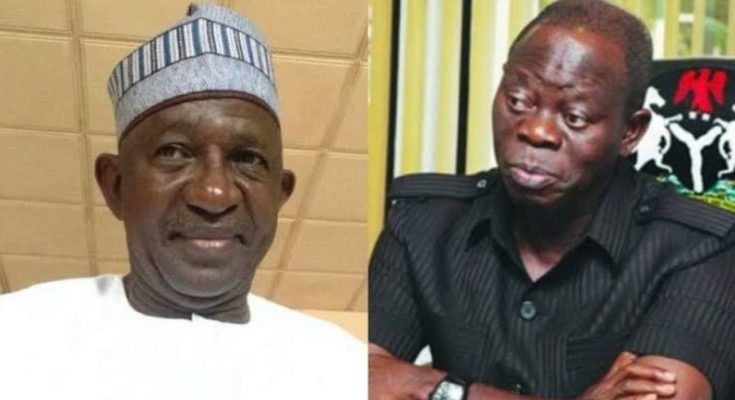 #Politics: Oshiomhole has made APC a nest of lawlessness. Lawal Shuaibu blows hot.

The All Progressives Congress (APC), Deputy national chairman (north) Lawal Shuaibu has accused the ”lawlessness” noticed in the party on Adams Oshiomhole as the Chairman of the party.

In his statement titled “APC and its future, let us exercise caution” Shuaibu conveyed fear of Oshiomhole being the ”end of APC,” while also pointing out that the party is yet to learn its lesson despite a supreme court judgment which voided its victory in Zamfara elections.

The National Vice chairman recalled how members of the party condoned his call for Oshiomhole to resign, an act which he said has led to principles and the rule of law upon which the party was established “to be subject to arbitrary administration without dictates of the law”.

In his own words:
“The ruling party which ought to be a model for others in the upholding of the rule of law is now the nest of lawlessness.
Interestingly, all the issues I raised in my said letter have come to pass. Till date, the party, founded on the principles of constitutionalism and rule of law, is now subject to arbitrary administration, without regard for the dictates of the law.

The ruling party which ought to be a model for others in the upholding of the rule of law is now the nest of lawlessness. The entire legal framework governing the party administration in Nigeria today, the Nigerian constitution, the party constitution, the electoral act, and INEC regulations and guidelines are more honored by the party in breaches than obedience.

To buttress my above assertion, the following few examples will drive the point home. By (Article 9.1(ii) and 9.4 (i) of the APC Constitution as amended, pages 6 and 8) every member will be registered at his ward when his or her name is entered in the register by the ward executives.

My understanding of this provision is that power in the party is exercised bottom up! What this means is that every member of the party is answerable to his constituency. Being a party member, therefore, is a constitutional issue embedded in the membership register.

Also, the constitution of the party stipulates a mandatory meeting of the national executive committee (NEC) every three months (Article 25 B (i) of the APC constitution as amended.). This regular meeting is not only targeted at keeping the members abreast of developments but ensuring collective responsibility of decision taken by the combined effect of the above provision and Article 18 of the APC Constitution as amended).

NEC is the main decision-making organ after the convention and shall meet every three months. The power to set up standing or ad-hoc committees of the party is vested in the same NEC.”

However he went further to accuse Oshiomhole of appointing himself as chairman of the screening committees for governorship/senatorial elections and the final petitions committee, challenged the legality of such appointment. He also claimed that Waziri Bulama who was appointed as the party’s acting national secretary on Monday May 18, was not democratically elected.