The billionaire founder of SKIMS kept her dark hair in a high ponytail braid, as she sported a neutral gray colored crop top in Malibu on Wednesday, July 22 in the images obtained by the Daily Mail.

Kim was joined by sister Khloe Kardashian, 36, and Khloe’s ex Tristan Thompson, 29, for the scenic, outdoor shoot which appeared to be on a patio nestled amongst trees and greenery. Kim appeared to be laughing with her sister in one photo, and in good spirits overall. 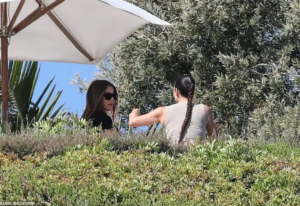 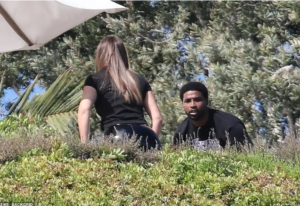 Khloe, still rocking her gorgeous brunette locks, stayed low key as she covered her face in a black pair of sunglasses. She dressed casually in a t-shirt and leggings, and could be seem chatting with Kim as they were surrounded by film crews. 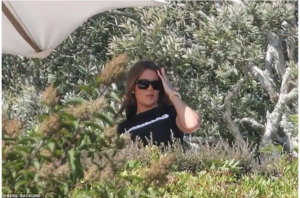 Tristan twinned in black, opting for a t-shirt bearing the logo of the Los Angeles Lakers (the Toronto, Canada native currently plays for the Cleveland Cavaliers).

The outing comes just a day after Kim’s emotional statement on Instagram, where she addressed Kanye’s struggles with bipolar disorder, which he’s previously talked about.

“As many of you know, Kanye has bi-polar disorder…anyone who has this or has a loved one in their life who does, knows how incredibly complicated and painful it is to understand,” Kim wrote.

“I understand Kanye is subject to criticism because he is a public figure and his actions at times can cause strong opinions and emotions. 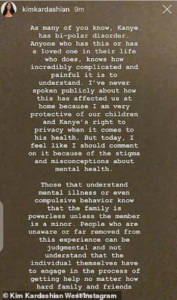 He is a brilliant but complicated person who on top of the pressures of being an artist and a black man, who experienced the painful loss of his mother, and has to deal with the pressure and isolation that is heightened by his bi-polar disorder,” she explained.

Her comments came after Kanye alluded to marital struggles in a series of now-deleted tweets, including one about how he had been trying to “divorce” the KKW Beauty founder.

The Yeezy designer also alleged that Kim and her mom Kris Jenner, 64, had been trying to “lock” him up.

Since the tweets and bizarre presidential campaign event, Kanye has been staying at his Wyoming estate where several friends have visited.

The rapper stepped out to a Wal Mart store in the area with record producer Damon Dash on July 22, sporting a blue hoodie, jeans and his Yeezy slippers. The two men could be seen sitting on a bench outside of the store. 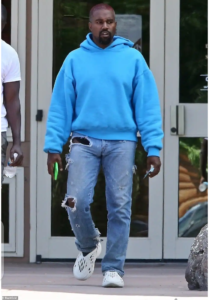