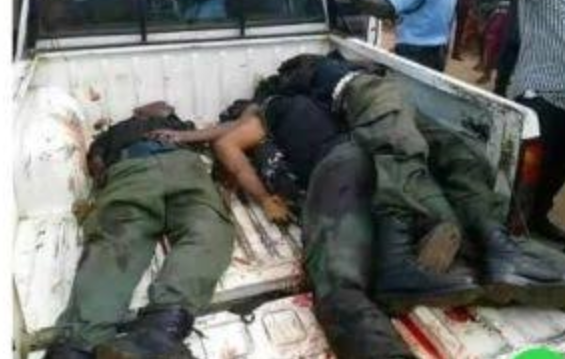 Several reports can confrm that gunmen attacked a bullion van transporting money from Enugu to Abakaliki, capital of Ebonyi state, killing four of the police officers who escorted the vehicle on Wednesday, July 29, 2020.

The gunmen reportedly tried to intercept the bullion van at Ezzamgbo junction, in Ohaukwu local government area of Ebonyi.

The robbers were said to have fired at the escort van conveying the policemen and in the process, four of them died while two sustained injuries.

Philip Maku, the state commissioner of police, who confirmed the incident, said the robbers trailed the bullion van from Enugu but were unable to loot it because the driver escaped.

“They damaged one of the tires of the bullion van but the driver was able to escape with the van. They could not give chase to the van as the driver was driving towards the military checkpoint ahead,” Maku said.

He added that the injured police officers have been taken to hospital for treatment while the deceased have been deposited at the mortuary.

Maku said the force has launched a search for the robbers and commenced an investigation into the incident.